This year I wanna do a postcards swap again. If you want to receive a holidays postcard from me drop your address in the comment (screened) or in a personal message and I would reply with my address and expect a postcard from you in return :)

123 hours in the air with 31 flights taken, this is almost 5 full days

tracked my flights with Flio 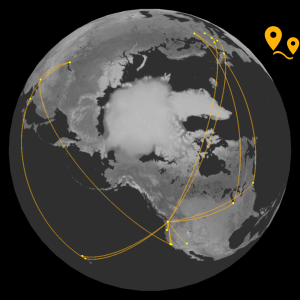 I was playing with DOT format at work (supported by our documentation system) and for kicks visualized incomplete graph of "how do I know people".

Somewhat pseudonymised version is under the ( Collapse )

For a past 4 month I've been doing "one photo a day" on my Instagram: https://www.instagram.com/dennyrolling/

I hope to do it for a full year.

24 hours should be a good lead time for organic commenters :D

A map is here

This night I had a dream about visiting Fallingwater, out of season this time, when nobody was around. It was just me and a couple of friends whom I could not quite recognize. I was showing off the corner windows, and explaining the narrow passages. Then (after 11 hours dream time) the caretaker showed up. Turned out he had a bed at the first floor room (which I can't recall in an actual building), but was unwilling to stay all alone over there, so had to do a long commute when our arrival raised the alarm. Then I proposed that I would be the in-house caretaker, and I got into that bed. This is where I woke up.

O: went to tati and got myself a warm blanket
Me: never heard of them, how do you write it in French?
O: http://www.tati.fr/
Me: I was expecting something like "h'toughteer" - [ta:ti], obviously.
O: ...
Collapse